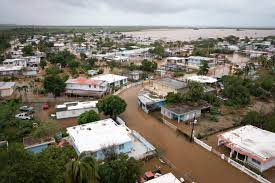 Residents of the U.S. island in the Caribbean didn’t have to search far to find reminders of the last major hurricane to slam the region, which occurred exactly five years ago, as Hurricane Fiona drew down on Puerto Rico this week: Thousands of houses are covered with blue tarps, the island is still littered with damaged buildings, and power outages are still common.

Hurricane Maria, the island’s greatest natural disaster in 100 years, killed around 3,000 people and completely devastated the electricity grid. Although Fiona was a Category 1 hurricane when it made landfall, the harm it caused even before it did, such as the loss of electricity and clean water, provided as a sombre reminder of why Maria represented a clear before and after in the lives of many island inhabitants.

According to Charlotte Gossett Navarro, chief director of Hispanic Federation Puerto Rico, “the energy system is crucial to everyone’s whole existence here in Puerto Rico.” “At our worst, we are endangering people’s lives.”

Grid a ‘poster child’ of decay of colonial system

According to Cecilio Ortiz Garca, co-founder of the University of Puerto Rico’s National Institute of Energy and Island Sustainability, the electric grid has always been fragile, but the escalating crises brought on by climate change, the pandemic, and fiscal pressures have brought it to its breaking point.

He said that Puerto Rico’s electrical system was intended to serve the needs of local colonial elites and interests on the U.S. mainland. The grid has evolved into a symbol of the institutions, colonial system, and population’s vulnerability.

The blackout that preceded Fiona brought up unpleasant memories of the gloomy months that followed Hurricane Maria’s Category 4 landfall on September 20, 2017, for many Puerto Ricans. According to the Rhodium Group, a policy analysis company, it took over a year to fully restore power to the archipelago, making the blackout the second-biggest in world history and the largest in American history.

The central mountain village of Ciales is home to Cintrón, who stated, “The electricity went out and right now I have candles in the house.”

The whole 3.2 million-person U.S. territory had a widespread blackout before Fiona made ashore on Sunday. By Monday morning, according to the power firm LUMA Energy, 100,000 clients got their electricity back.

The Puerto Rico Electric Power Authority (PREPA), Puerto Rico’s beleaguered power provider, filed for bankruptcy in the summer of 2017 as a result of its struggling with an outdated electric system and $9 billion in debt. At the time, no other operating U.S. public firm had a debt of more than $9 billion.

After Hurricane Maria, Whitefish Energy Holdings, a tiny Montana-based contractor, and PREPA agreed to a $300 million contract to restore the electrical infrastructure. The firm, which is situated in the hometown of the former interior secretary of President Donald Trump, had two employees on the day of the hurricane, according to The Washington Post. The contract was terminated by PREPA as a result of Congressional committee investigations and complaints from politicians.

2020 saw PREPA’s transition to privatisation. A 15-year agreement was made by the power authority with the American-Canadian electrical cooperative LUMA Energy to take over transmission and distribution tasks. The corporation promised to shorten power outages and their duration.

Rolling blackouts, however, continue to occur. According to the Associated Press, businesses have shut down, and one of Puerto Rico’s biggest hospitals lost power last week when one of its generators failed in the middle of an outage.

An island-wide “humanitarian and economic catastrophe” has been caused by the frequent and extensive outages, according to a statement made earlier this year by Agustn Carbó, the Environmental Defense Fund’s senior manager of energy transition located in San Juan.

In the wake of Hurricane Maria, work on the infrastructure has been “slow and unequal,” causing Puerto Ricans to pay more for energy while also dealing with erratic service and blackouts, he said at the time.

“It is intolerable that nothing fundamental has changed five years after Hurricane Maria. Puerto Ricans and the island’s economy are suffering as a result of the severe energy situation right now, according to Carbó.

Puerto Ricans have consistently opposed LUMA Energy over the past year. Just a month ago, a sizable crowd gathered in front of the governor’s residence in San Juan to urge Gov. Pedro Pierluisi to revoke LUMA’s contract.

In a song video published on Friday, the 28-year-old rapper Bad Bunny brought attention to Puerto Rico’s electricity issue. Videos of a hospital without electricity and news reports regarding LUMA Energy and the earnings of its executives were featured in the piece, which also featured pictures of Puerto Ricans marching in the street while carrying lanterns.

When USA TODAY contacted LUMA Energy and PREPA for comment on Monday, neither organisation responded right away.

With no power, no water

According to Carl-Axel Soderberg, a member of the Puerto Rico Committee of Experts and Advisors on Climate Change, without electricity, filtration systems that provide drinkable water for Puerto Rican houses cannot be powered.

According to officials, turbid water at filtration facilities or a lack of electricity caused over 750,000 residents in Puerto Rico, or approximately two thirds of the island, to awaken without access to drinkable water on Monday.

The Puerto Rico Aqueduct and Sewer Authority (PRASA) relies heavily on LUMA and PREPA, according to experts, even though it receives water from a variety of sources through an intricate network of reservoirs, canals, and rivers throughout the island.

The organisation said that even though more generators were purchased following Maria to minimise water interruptions, several of these generators broke down during the hurricane.

Soderberg, a former head of the Caribbean environmental protection section of the United States Environmental Protection Agency, questioned, “How can it be?” “You double verify that they are operating when you see that this thing is coming over.”

He claimed that the FEMA’s delayed financing is one of the main obstacles preventing PRASA from modernising its infrastructure. Even though the agency gave PRASA more than $3 billion, bureaucratic hurdles have hindered critical projects.

However, there are initiatives that might benefit PRASA but are technically not within its authority.

In the wake of hurricanes Irma and Maria, the U.S. Forest Service estimates that over 144 million trees in Puerto Rico were lost, making the island more susceptible to flooding and mudslides during periods of severe rainfall.

One of PRASA’s main goals should be replanting those trees alongside the island’s department of natural resources to stop significant sedimentation that would overload filtration units, according to Soderberg.

You need to think creatively, he urged. The government of Puerto Rico has not set aside funds to restore those trees, and if they don’t, we will soon get more silt than we had prior to Hurricane Maria.

USA TODAY’s request for comment from PRASA has not received a response.

Video captured a bridge in Utuado, a village in the central mountains of Puerto Rico, getting carried away in the murky floodwaters on Sunday as Hurricane Fiona dumped copious amounts of rain on the island.

According to Eileen Velez Vega, the transportation secretary for Puerto Rico, the building was constructed as a temporary fix while a new, permanent bridge was being constructed in the wake of Hurricane Maria. Construction on the replacement bridge had not yet started; it was scheduled to open in 2024.

Planner Luis Garca Pelatti said, “I think that’s what is most impactful – a bridge that was created as a temporary fix, and five years later, we haven’t been able to build a new bridge.” Why couldn’t this be completed, I wondered.

Following Hurricane Maria, political wrangling and the Trump administration’s limits on billions of dollars in help caused federal monies intended for Puerto Rico’s recovery to be delayed. However, the government of Puerto Rico has taken its time to rebuild despite the increased inflow of funding.

According to Cristobal Jiménez, director of Corazón Latino, Puerto Rico, the rehabilitation projects “have been delayed owing to procedures, paperwork with the purpose of delaying the work for no obvious reason.”

The health of the community should be the top priority, he added.

Approximately $5.3 billion, or 19%, of the $28 billion in funding that FEMA directed for post-Maria recovery projects had been spent by the island’s government as of August, according to Chris Currie, a director in the Government Accountability Office’s homeland security and justice team, at a Congressional hearing this month.

Additionally, just 21% of the official post-Maria restoration projects have been finished by the government, and 3,600 families are still thought to be living beneath blue tarps, according to local media.

In his testimony, Currie listed a number of obstacles Puerto Rico must overcome in order to complete its recovery efforts, including “limited institutional knowledge for managing FEMA’s grant programmes,” inflation-driven price increases for projects, and challenges obtaining funding to begin construction.

. More than 700 employees, with more than 90% of them being Maria survivors, are currently assisting with the recovery following the disaster, according to Anne Bink, FEMA Associate Administrator for Response and Recovery.

Increasing readiness: In Puerto Rico and the U.S. Virgin Islands, large-scale drills and advanced planning are more usual for situations of this nature.

In advance of the disaster, FEMA dispatched more than 300 employees to Puerto Rico.

Increasing supply capacity: According to Bink, there are now four FEMA warehouses in Puerto Rico, up from one before Hurricane Maria. Additionally, the amount of food and water that are accessible for distribution has been increased tenfold. In addition, she noted, they have three times as many generators for emergency electricity.

According to Bink, FEMA is working with PRASA to restore clean drinking water while giving bottled water in the meantime. FEMA is also working with the government, LUMA, and the project to strengthen the electricity system.

Gossett Navarro of Hispanic Federation claimed that Puerto Rico’s citizens are still suffering as a result of the island’s sluggish recovery. The island is currently dealing with the repercussions of another terrible hurricane.

According to Gossett Navarro, “the reason why our energy system collapsed the way it did is because we have not made enough progress in recovery.” “Day three and day four have already passed (of the power outage as of Tuesday). On Saturday, several individuals started losing electricity. That is a life lost.”