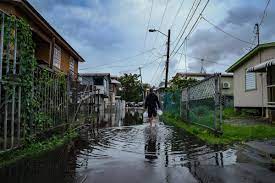 The vehicle driven by Luciano Bozzolo sped for the inner mountains of Puerto Rico. He had a mission to provide food, water, generators, and other essential supplies to communities devastated by Hurricane Fiona.

The 43-year-old Bozzolo said to USA TODAY over the phone, “We had a buddy call begging for help,” on Tuesday.

The San Juan resident claimed he had already witnessed massive landslides, destroyed homes, and downed powerlines brought on by severe rains and floods. His own 17th-floor apartment is still without power, water, or functioning elevators.

He had heard that the adjacent town of Utuado’s road, which had previously been impassable due to storm debris, was now open for travel.

In the wake of yet another major hurricane, Puerto Ricans found themselves rescuing vulnerable residents, repairing homes, and keeping an eye on their neighbours, exactly five years after Hurricane Maria’s high winds devastated the island, killing thousands, and sending millions into months of darkness.

Rafael Joglar, a 68-year-old San Juan-based biology professor, described the situation as “a nightmare.” “Hurricane Maria hit us five years ago, so going through this again feels kind of extremely strange and unusual.

In a news conference, Steve Goldstein, the NOAA liaison to FEMA, reported that Fiona, a Category 1 storm at the time, dumped up to 30 inches of rain in certain areas of Puerto Rico and the U.S. Virgin Islands between Friday morning and Tuesday afternoon.

According to Goldstein, there were some rock and mudslides as well as several rivers that burst their banks and destroyed bridges. He warned that further showers might cause more floods and slips.

Even if several of the rivers came close to the records set after Hurricane Maria in 2017, none of them did, according to Goldstein.

According to Keith Turi, associate administrator for recovery at FEMA, at least four people have perished and more than a million customers, or nearly 80% of the island, are without power. He claimed that FEMA will be deploying “hundreds” more workers in addition to the “few hundred” responders who are already on the ground. Impact evaluations are still continuing.

We are still firmly entrenched in the reaction and life safety phases, according to Turi.

Lt. Col. Josue Flores of the National Guard told USA TODAY that on Monday, National Guardsmen in the municipality of Cayey in central Puerto Rico saved 35 nursing home patients from a structure that was in danger of collapsing due to a landslide. He said that they waded through the muck to gather the patients, their possessions, medical supplies, and beds in order to transport them to a shelter.

“We’re transporting you to a secure zone, we were assuring them. We’ll take steps to keep you secure “said Flores.

Nearly 1,000 inhabitants were rescued from flooded houses and communities by Guard members near Salinas on the southern coast, according to Flores, during the storm’s peak.

They also brought supplies and food to a village that was cut off by a broken bridge.

By Tuesday, according to Flores, rescue operations in his command areas had decreased. He said that teams were trying to clear roads so that utility workers could restore lights and allow relief and families to pass.

The good news, he added, is that everyone in the neighbourhood gets together, grabs an axe and a chainsaw, and they start clearing.

In San Germán, on the southwest coast of the island, Ana Navarro, 58, said she and her daughter spent Tuesday cleaning water out of their house and clearing their backyard of fallen trees.

Reading novels and playing with their kitties helped them get through 16 hours of hurricane winds and torrential rain, the two told USA TODAY over the phone.

Because of Maria, it was really frightful, according to Navarro, a researcher with expertise in water conservation.

After Maria, the family went two months without water and seven without power, according to Ana Beatriz Seplveda, 26, Navarro’s daughter. But whereas Fiona went slowly over the island and dumped rain for hours on end, Maria came quickly and forcefully as a Category 4 hurricane with sustained winds of 155 mph, according to Navarro.

The mother and daughter said that when they left their house on Monday, they saw landslides and wandering animals that had been abandoned. A dog and two cats are now being housed there in a bedroom. The concrete house resisted Fiona’s gusts, but according to Navarro, water continued to seep through the windows and pour from the roof.

Without electricity or running water, Seplveda claimed that she and her mother had been relying on their cistern, which has been a fixture in homes since Maria.

Since we are aware that we must be ready, I believe that everyone today owns a generator and a cistern. Seplveda “You can’t sit around and wait for the government to step in. On your own, you had to be ready. That is precisely what we accomplished.”

Navarro stocked up on food and emergency goods before Fiona, she claimed. She handed some of her goods to her 74-year-old neighbour on Tuesday morning. She is especially worried about the sizable senior population in her neighbourhood.

In our villages, Navarro added, “People have to take care of themselves. I don’t know where FEMA dollars go.” The scenario with these catastrophes in Puerto Rico is consistent.

36-year-old Alberto Serrano said he and his family withstood Fiona in a family house that had been damaged by Maria when he spoke to USA TODAY on Tuesday from Pastillo, a seaside community east of the southern city of Ponce.

Serrano, a mechanic who was born in Puerto Rico and currently lives in Connecticut, was on the island with his wife. They lost electricity in the midst of violent storms and wind, walking through knee-deep water to a relative’s house for candles, batteries, and propane.

They took cover on the second floor as breaking waves overwhelmed his sister’s first-floor apartment. To pass the time as the winds howled, the family played dominoes.

He said that it was roaring.

The following day, they discovered strewn debris, uprooted trees, cracked windows, and broken concrete, but no one had been badly harmed. Neighbors aided one another in the cleanup. While looking for a felled tree, Serrano came across several plantains. He was astounded at the tenacity of the local populace.

“It’s astonishing how everyone just carries on with their daily activities. Shake it off, if you will, and keep going “said he.

In the capital of Puerto Rico, Joglar left his ground-floor flat on Tuesday afternoon when the rain finally stopped for the first time in days. He then walked to his damaged garden and began chopping off branches.

He told USA TODAY as he sat in his car charging his phone, “We have endured so much.

Joglar, like many Puerto Ricans, has become frustrated with the island’s current pattern of frequent power outages. He claimed that at least once a day, the electricity in his flat went out. At least three new refrigerators and microwaves had to be purchased by him in the previous two years due to the frequent outages damaging the appliances, he claimed.

Joglar noted that while he was a professor remotely instructing students during the COVID-19 epidemic, he was continually worried that the power might go out and disrupt his lessons.

“Congress makes several pledges to rehabilitate our island, but none of those promises have materialised. Nothing has changed in the five years since the previous hurricane. Our highways are in ruins. Our hospitals are in poor condition “added said. We consider ourselves to be second-class Americans.

Joglar claimed that just after Fiona hit, he was able to immediately check in with his immediate family to make sure they were okay. His phone eventually died. He added that as a result of being indoors, he read numerous children’s books, including two on Hurricane Maria.

He went to his sister’s home on Monday night and watched television for the first time to see footage of Fiona’s aftermath in other sections of the island. He claimed to have never witnessed flooding on such scale.

“Our island was totally wrecked by Hurricane Maria five years ago. And now the issue is: What lessons have we learned? Have we become better?” said he. “No is a given; it is. We have not bounced back. We haven’t really learnt much at all.”