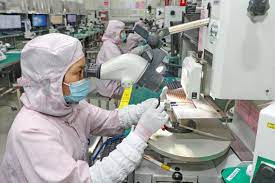 Analysts warn that Chinese President Xi Jinping’s ambition to “win the battle” in key technologies and strengthen China’s position as a tech giant might be seriously harmed by Washington’s unprecedented moves to restrict the export of sophisticated semiconductors and chip-making equipment to the nation.

On October 7, the Biden administration announced extensive export limits that prohibit Chinese corporations from purchasing sophisticated semiconductors and chip-making equipment without a licence. The law also bars “US people” — including US nationals and green card holders — from providing support for the “research or manufacture” of chips at specific Chinese manufacturing sites.

“The US actions pose a significant challenge to China’s technical goals,” Capital Economics analysts Mark Williams and Zichun Huang said in a recent research paper. According to the researchers, the global semiconductor sector is “nearly totally” dependent on the United States and nations associated with it for chip design, tooling, and production.

“Without these,” the analysts said, “Chinese businesses would lose access not just to sophisticated chips, but also to technology and inputs that may have helped local chipmakers to climb the ladder and compete at the cutting edge over time.” “The US has cut the rungs away,” they claimed.

Chips are required for everything from cellphones and self-driving vehicles to sophisticated computers and weapon production. Officials in the United States have described the decision as a precaution to defend national security interests. It also comes at a time when the United States is aiming to invest heavily in domestic chip production, following chip shortages earlier in the year that highlighted the country’s reliance on imports from abroad.

The current US sanctions, according to Arthur Dong, a teaching professor at Georgetown University’s McDonough School of Business, are “unique in contemporary times.”

Previously, the US government prohibited the sale of particular electronic items to Chinese corporations such as Huawei. It has also forced some large US chip-making companies to cease exports to China. However, the most recent migration is far more extensive and consequential. It not only prohibits the export of sophisticated semiconductors created anywhere in the world using US technology to China, but it also prohibits the transfer of the equipment needed to make them.

Beijing has set a goal of becoming a global leader in a wide range of industries, including artificial intelligence (AI), 5G wireless, and quantum computing, with its Made in China 2025 road map. At the Communist Party Congress earlier this month, where he secured a historic third term, Xi highlighted that the nation will prioritise tech and innovation and grow its talent pool to develop homegrown technologies

“China will strive to enter the ranks of the world’s most inventive countries by 2035, with tremendous self-reliance and strength in science and technology,” Xi stated in the party congress report, which was published on October 16.

Dong believes that the current US restrictions would make it more difficult for China to grow in AI and 5G, given the importance of sophisticated processors in both areas.

Mass resignation of US executives?

The restriction on American citizens and legal residents working with Chinese semiconductor makers is a stark and possibly disruptive feature of the guidelines.

Such sanctions are often “only applied against ‘rogue regimes'” such as Iran and North Korea, according to Dane Chamorro, a partner at Control Risks, a global risk consultancy located in London. Chamorro described the choice to use this against China as “unprecedented.”

Many Chinese CEOs may now have to choose between preserving their jobs and posing as legitimate US citizens. “You can’t have it both ways,” Chamorro stated.

According to Dong of Georgetown University, the restriction might result in a mass departure of senior executives and key research employees at Chinese chip makers, which would be devastating to the sector.

So yet, it’s unclear how many American workers are employed in China’s domestic semiconductor business. However, an analysis of business papers reveals that key executives at more than a dozen semiconductor manufacturers possess US citizenship or green cards. According to the most recent business filings, at least seven executives of Advanced Micro-Fabrication Equipment China (AMEC), one of the country’s leading semiconductor equipment manufacturers, possess US citizenship, including founder and chairman Gerald Yin.

If these top executives go, “a leadership and technological hole inside China’s chipmaking sector will be created,” Dong warned, because the nation will lose executives with years of chipmaking expertise in an industry with “one of the most complicated production processes known to mankind.”

Beginning of a tech war?

While East Asia produces the majority of the world’s chips, China is reliant on foreign chips, particularly modern processor and memory chips and related equipment.

It is the world’s largest importer of semiconductors, spending more money on them than it does on oil. According to government figures, China purchased a record $414 billion in semiconductors in 2021, accounting for more than 16% of total imports.

However, some Western companies have already begun to prepare to suspend supplies to China in reaction to the US export restrictions.

The Dutch semiconductor equipment provider ASM International (ASMIY) stated on Wednesday that it expects the export restrictions to harm more than 40% of its sales in China. In the first nine months of this year, the country accounted for 16% of ASML’s equipment sales.

Lam Research (LRCX)h, which provides semiconductor equipment and services, also warned last week that the US export restrictions might cost them between $2 billion and $2.5 billion in annual sales in 2023.

Analysts believe that the recent party conference has hampered China’s response to the current US export limits. However, when Beijing evaluates the importance of the sanctions, it may counterattack. Xi is “concerned” about US intentions to boost domestic chip manufacturing as his government works to limit China’s capacity to create them, said US President Joe Biden in a speech on Thursday.

“This fight is only getting started,” Chamorro remarked.

According to Chamorro, the most valuable “card” in China’s hand may be the supply of processed rare earth materials, which Beijing could ban. Rare earth minerals are key elements in the creation of electric vehicles, batteries, and renewable energy systems.

“These are not easily or rapidly replaced, and China controls the processing and supply chain,” Chamorro explained.

Meanwhile, the Biden administration is considering additional curbs on other technology exports to China, according to a senior US Commerce Department source quoted by the New York Times on Thursday.

If either country takes these moves, the United States and China’s technological arms race might reach unprecedented heights.